The Stunning Castle Ruins of Interlaken

Interlaken has a long history and, unknown to many visitors, has some great castle ruins scattered around the area between the lake of Thun and lake of Brienz. There are the lakeside Weissenau castle ruin, the Swiss historically famous Unspunnen castle ruin and the Rotenfluh mountain side ruin. On top of that there is also the magnificient Ringgenberg castle and church which are more than ruins and almost completely intact.

The Weissenau castle ruin is an old harbour fortress that can still be entered and climbed. Located the nature reserve with the same name and the spot where the Aare, Switzerland's longest river, enters the lake of Thun this place has great views from the top. The remains are impressive with a big chunk of the outside walls still standing and the tower still towering. Definitely worth a visit if you are going for a lakeside stroll or end up following the Aare river from town to the lake. 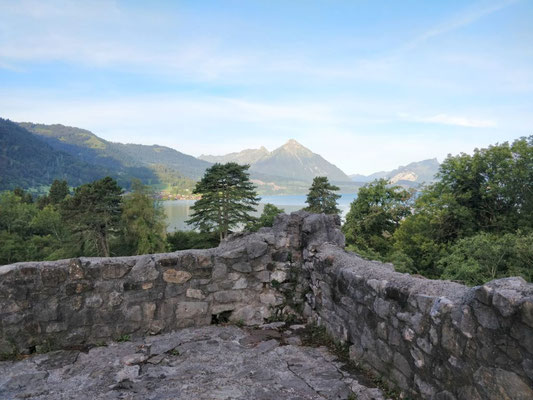 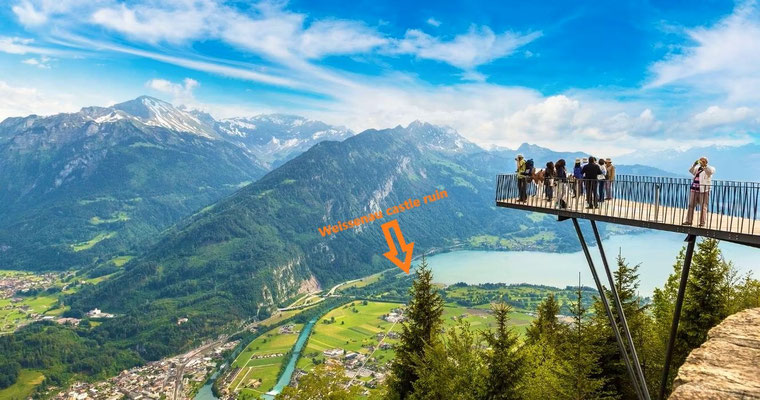 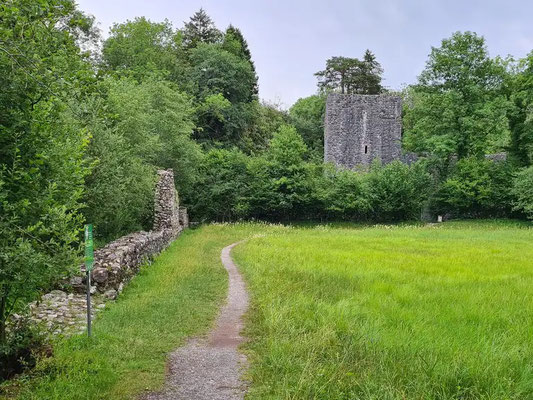 The church "St. Peter» was built in the 11th century and is considered to be one of the first churches in the Bernese Oberland. Today the tower and the foundation walls have been very well preserved and can be visited on a very epic mountain top location between Goldswil and Ringenberg, just 20min by foot from the Interlaken Ost (East) train station. The architectural style is of historical importance and is well worth a visit. Probably the coolest ruin of the Interlaken area with stunning views and in a well preserved state.

The unique Romanesque bell tower of the church ruins attracts attention from afar and has been modelled on "Campanile" Northern Italian building traditions. This is evidence of the lively trade relations between this region and northern Italy. The actual church was moved to Ringgenberg in the 18th century and so the St. Peter church slowly turned into a ruin. A charming circular route connects the Goldswil church ruins with the Ringgenberg castle ruins (details about that ruin below). The path leads past many scenic and historical features 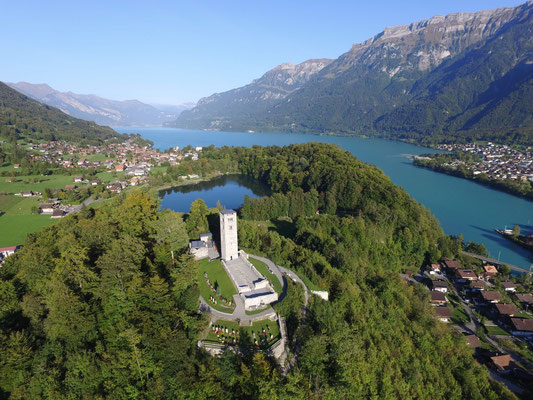 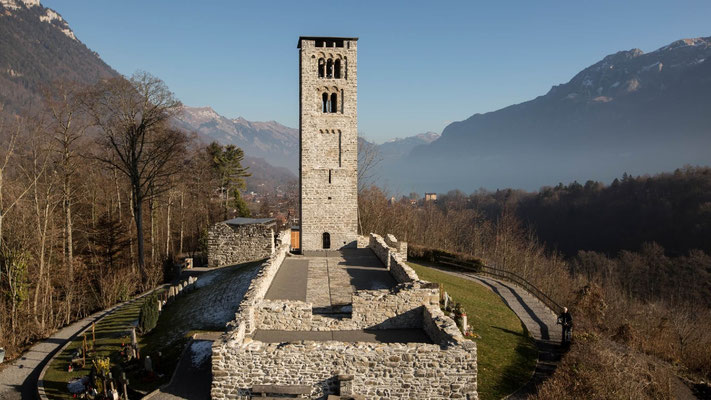 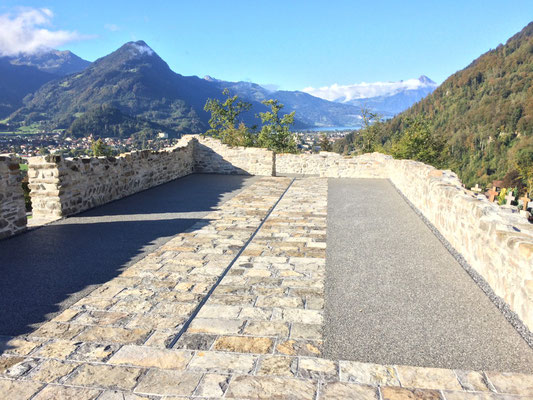 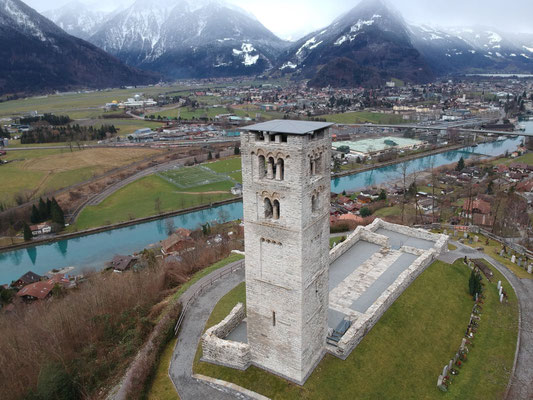 The fantastic Unspunnen castle ruins tower above the picturesque village of Wilderswil on a rocky hill at the foot of the local Abendberg. The historic site dates way back to the early 13th century and was owned by several noble families before finally coming under the authority of the Canton of Berne and the village of Wilderswil. In 1533 the impressive building was allowed to fall into disrepair but a big part of it is still intact. The walls of the central round tower, parts of the ring walls and the two residential wings can still be admired and entered. The Unspunnen castle ruin has a special place in Swiss history with it being the place of a ethnic festival which is still taking place every 12 years in the Interlaken area. The famous Unspunnen stone as a symbol of unity and friendship is still playing an important role in recent Swiss history. 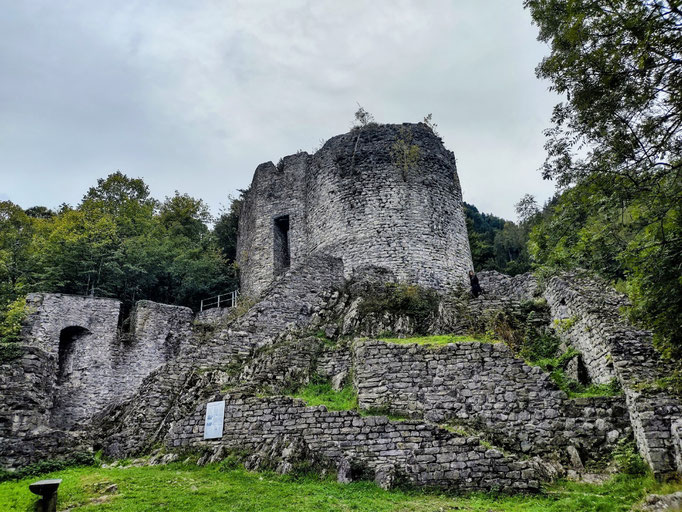 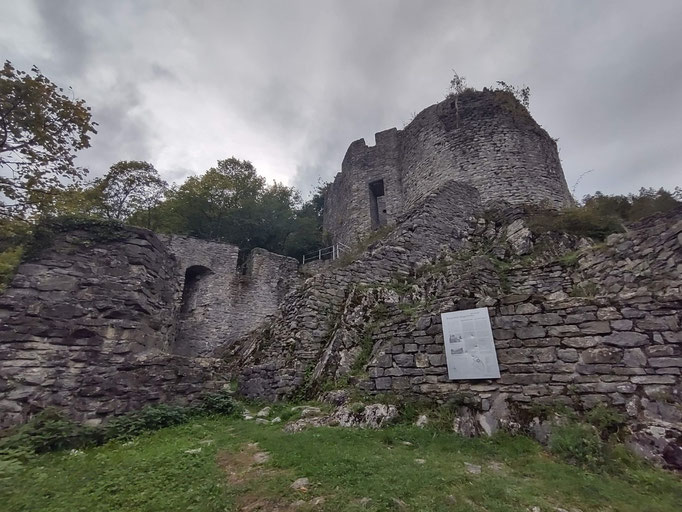 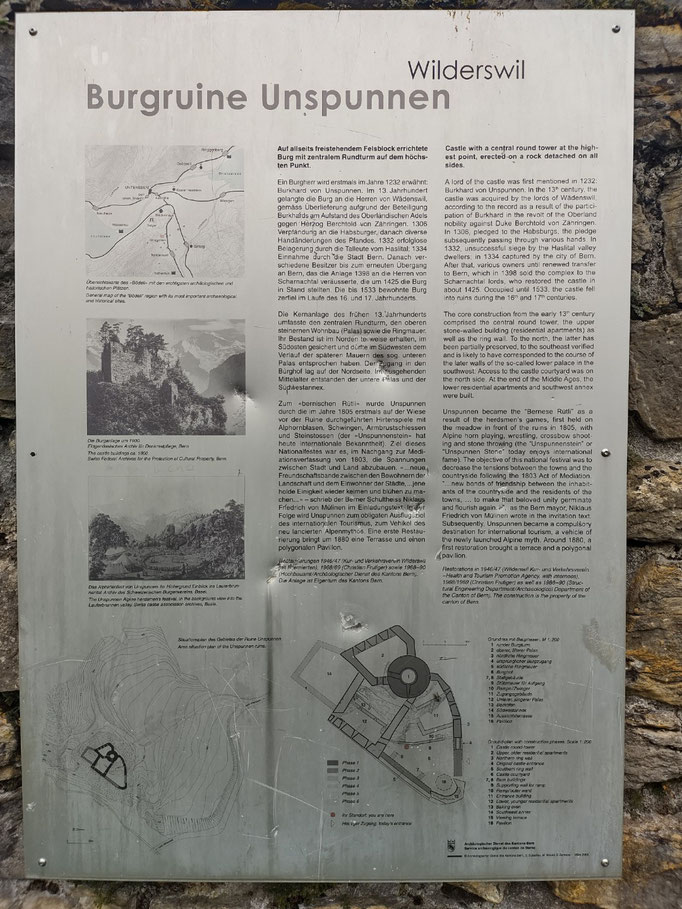 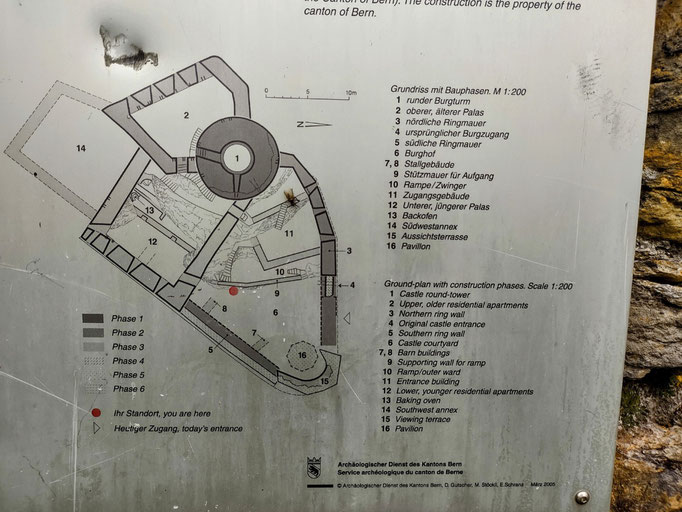 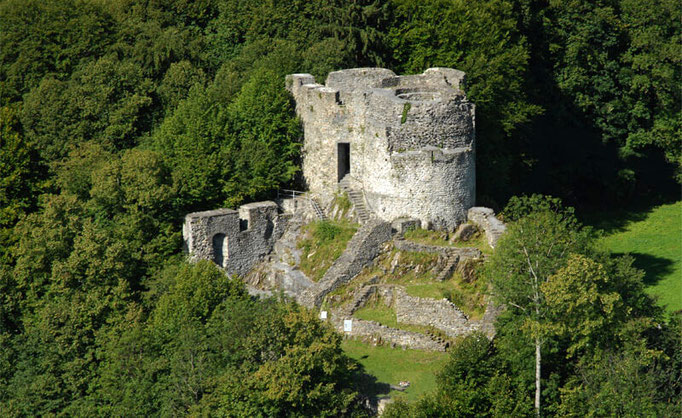 The Rotenfluh castle ruin is the only remaining cave castle in Switzerland. Well, not much is remaining at all but the views, hike there and historical significance still make it an enjoyable visit not too far from the Unspunnen ruin. Surprisingly there is a grill spot right in the castle ruin remains so you could hike up the many stairs to reach this spot and have a lunch bbq on a historical significant spot. 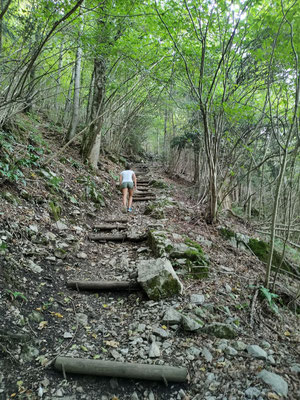 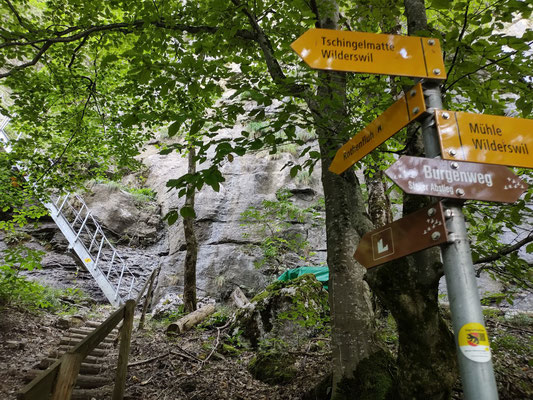 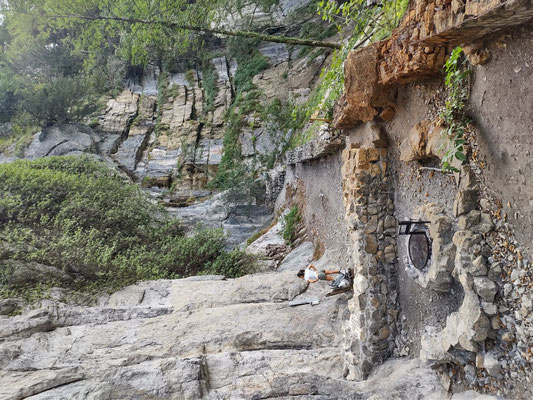 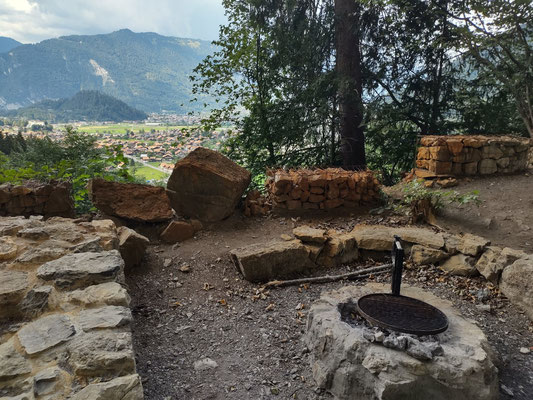 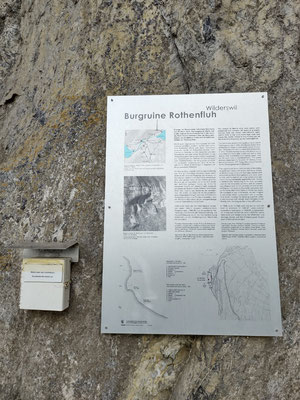 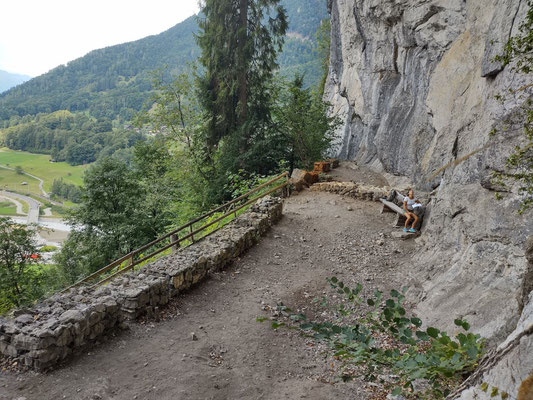 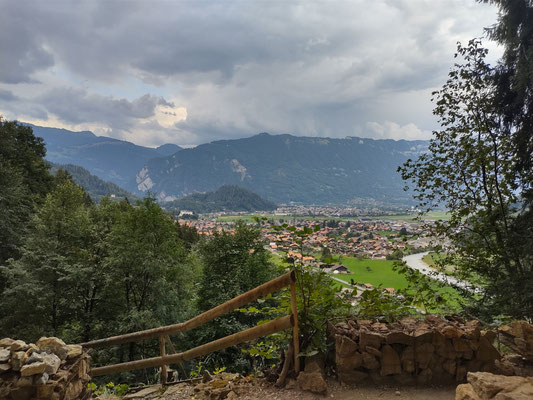 The impressive Ringgenberg Castle Church dominates the northern shore of Lake Brienz. Ringgenberg’s Castle Rock (Burgfelsen) is home to two monuments from different eras and spheres of life. The ruins of the medieval castle and the Protestant Baroque church both are standing side by side overlooking the lake of Brienz.  Since 2008, the castle tower has been accessible via stairs, a gallery and a viewing terrace allowing for a fantastic view over Lake Brienz from the top. The Ringgenberg castle and church are easily reachable by walking for about 50 minutes from the Interlaken Ost train station following the Aare and lake of Brienz shoreline. 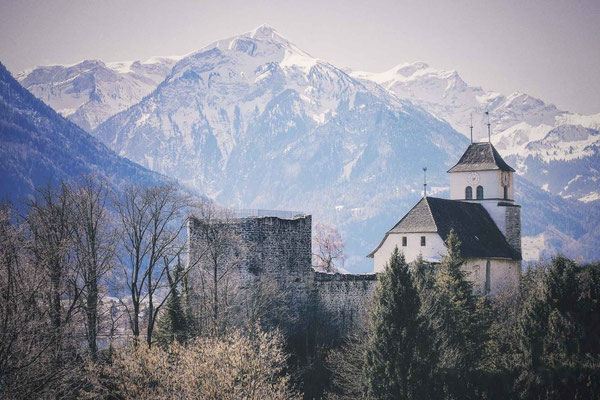 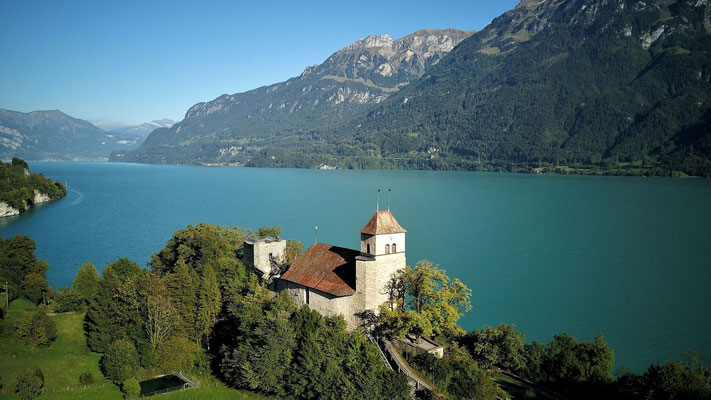 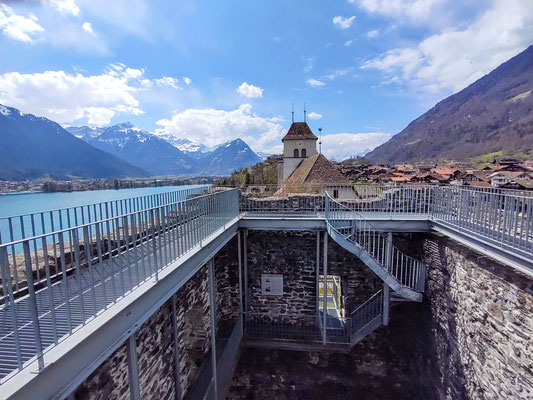 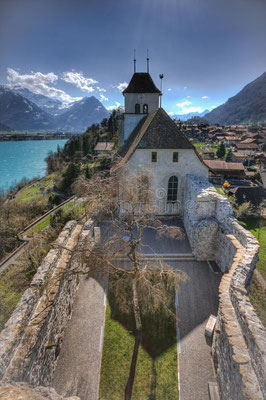 The Schadenburg ruin is a rectangular stone building and is located right the village of Ringgenberg and its castle & church ruin. While walking from Ringgenberg and Niederried route you can take a short detour through the forest and discover the castle ruins.

From the street it is a ten minute uphill walk to reach the ruins in the forest. Here you dive into the medieval world of legends: The legend says that Baron Kuno von Ringgenberg wanted to build a dungeon here in the 13th century. However, he could not complete his work because he fell victim to an act of revenge. Other assumptions indicate that the fort was to be used to monitor the trade route between Interlaken and Brienz. 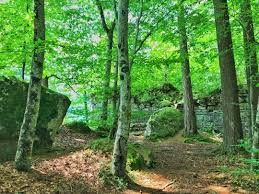 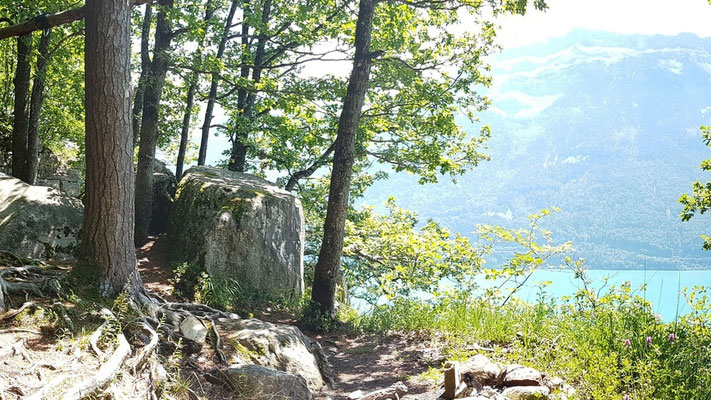 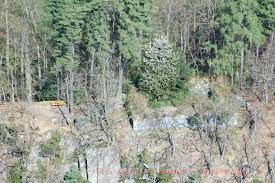